Yesterday, I was explaining to a less experienced player how I so easily knew where the hostages he missed where located, after the young Element Leader exclaimed that he was always missing hostages rather then suspects 8=). For those that don't play with me a lot, I am that annoying-guy in the element, who can usually tell the Element Leader what rooms were cleared, which were missed, and so on. In fact, during one live op, I ended up guiding a younger EL around the huge map.

The way I accomplish this feat of meticulous memory, is to keep track of it in my brains equivalent of a data tree. By remembering where I am in the mental tree (I have an excellent sense of direction), I know what the neighbouring nodes are in the tree—and if I forget what is after those, by the time I reach the spot-after, I can compare what I see with a 'snap shot' stored in my head, to trigger my brain into remembering where we've been before. If we've never been there, then obviously, I append it, or if it is an unexplored door, mark it as such mentally.

I've been thinking of putting up a diagram of it for some time now, so here goes, lol.


This is a diagram of a fairly simple building, it contains a starting room (1), a large room (2) with a hostage and two terrorists: three doors connecting to two other rooms (3 and 4), containing terrorists and a hostage. Those rooms (3 and 4) connect to a final room (7) by way of hallways (5 and 6, respectively), and contains a hostage. 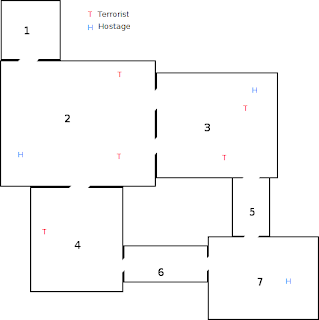 It is a very simple diagram, so I doubt anyone will have problems understanding that, because if you do, there is a problem with your map reading skills ^_^.


The way I navigate in side a building like that depicted in the above diagram, is storing each element as a "Leaf" or node in a tree, itself being a tree in my minds eye. Each node is a reference in my brain, telling me what door( node)s connect it to other rooms, and what was found in it (in this case, hostages and terrorists). Those in turn, point to other nodes or leaves of the tree, creating an organised pattern, shown below: 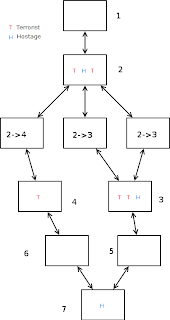 Here you can see the nodes are again labelled, matching to their "Room number" from above. I don't mentally record room numbers, rather room names, but for sake of examples, I find numbers simpler to explain.

The first node (1) references a single child node (2), which as you can see, contains two terrorists and hostage, and references three door( node)s leading to the adjoining rooms—exactly as in the floor plan I drew earlier. To make it more obvious, I wrote X->Y on the nodes representing the doors, denoting where they lead to. The door( node) 2->4 takes you into room 4, from room 2. Just like in the floor plan, room four contains a terrorist and a door to a hallway (6), The two door nodes, 2->3, lead into room 3 from 2, where room 3 contains two terrorists and a hostage, again exactly in the floor plan diagrammed previously. The hallway( node)s (5 and 6) connect rooms 3 and 4 to room 7 (respectively), and room 7 contains a hostage.


This is actually a simplification of how my mind works, a since my mind notes doors, hostages, terrorists, downed team mates, objectives, important events, etc, as the children of a tree leaf, and the doors reference the next leaves. That however, is only of importance to another programmer :-o.

Since my head keeps a running track of where I am, and I know easily if I started in room 1, walked into the next room (2), and took the single door into another room, that I must be in room 4, and the door ahead leads to the hallway (6) connecting with room 7. The data tree (i.e. second diagram), is mental abstraction, showing (very roughly) how my mind views the relationships between elements of a map (e.g. the first diagram). So in essence, navigating inside a building, is a simple matter of scanning the tree in memory, and vola, I know exactly how to get to X from Y, lol.

This is how I navigate in doors, and it works damn well, certainly works better then asking a terrorist for directions! Because my working conditions place me inside buildings quite a lot, it has been necessary for my senses of navigation and deductive reasoning to adapt accordingly. I almost never get lost, just don't ask where you left the swiffer duster. Even navigating outside, my roads-view isn't street sign or land mark based, but closer to watching a overhead view on a HUD map from some video game.... I blame it on so many years behind a controller.


Lacking the knowledge of how the human mind operates, I've always found it easier to explain things in relation to a how a computer does its stuff.... because honestly, my mind functions eerily similar to a computer as it is... but hey, I am a computer geek!
Posted by Terry Poulin at 1/05/2010 06:34:00 PM