Well, I suppose all awesome footwear must wear out eventually, such is the nature of the clothes you love. On my way to visit my girl friend and her family over the break, coming through security in Calgary, while I was putting my boots on I noticed a nice hole in the lower port, inward side. It's about large enough to put a finger through. I don't know when the breakage happened, never noticed it before; leaving Atlanta I was a tad to pre-occupied with getting to my gate to notice.

While I was in Canada, I showed this to my Firefly and she noticed that the outsoles were also dead on arrival. 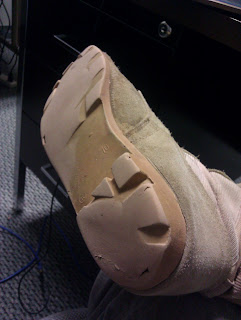 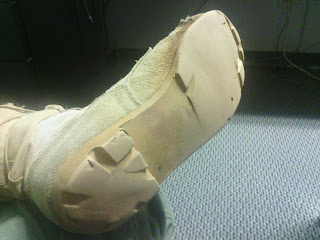 I should probably have noticed this myself, once I started to note unusual traction loss and "Sliding" around the past few months. I looked up what it would cost for having them resoled with vibram

My boots outsoles are pretty cheap, clicking through the picture in this journal entry links to their page at Rotcho. Actually, I think everything they make is pretty cheap but the quality to cost ratio is reasonable enough in all the cases that I've tried. These boots are Pretty Damn Comfortable and the material is sufficent for my environment, now if I was jumping out of air planes for a living or a park ranger, I might decide otherwise.

If it wasn't for the hole in my port boot, I'd likely try to have them resoled. That would probably cost more than my boots are worth, or at least with something like a vibram outsole. Maybe that'd still be like putting lipstick on a pig, but I really like my boots lol. Bet a decent shoe repairer could even fix the hole.


So, bit of a debate: just buy a new pair or invest in something better. I'm thinking that if I bought a new pair of Rotcho 5057's, I'd may as well buy a new pair every 8-14 months; however long it takes to wear out the outsoles. I'm not really convinced that even e.g. a vibram outsole is going to offer /that/ much greater life, but hey, if you're gonna spend the $ to resole boots, may as well have a quality boot worth more than the resoling cost, eh? In looking around, I'm thinking about Belleville 790's or 795's. The former is unlined like my Rothco 5057's, where as the latter has almost half a pound of insulation. My feet don't really get very cold, at least not under socks and inside my boots, even when we were walking out in -8C/+18F kind of temps with ice/snow, I was perfectly warm of foot. In particular I like the look of the Belleville's construction versus the Rotcho. What I don't like, is there is NO one here that sells the darn things, so the only option is online.

Of course, if it doesn't work out, I could always get up early one Saturday and take a drive over the Bear Paw Army & Navy in Griffin, and see if they've got anything I could use.
Posted by Terry Poulin at 1/05/2012 02:26:00 PM