An odd artifact of my small desk space is how well it meshes with my tablet. 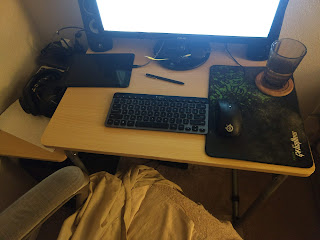 The mousepad dominates most of the working surface; the Razer Goliathus because I wanted a large pad and the SteelSeries Rival because I got tired of how fast Logic MX rats wore out^. Years ago, I had bought my K810 as a way of sharing a keyboard between my tablet, laptop, and desktop at work; these days it just serves as my desktop keyboard. Underneath the headphones and xbox controller off to the left is a USB keyboard of similar size and layout.

This lack of space is what lead me to such a small keyboard--full size but with the "Right" matter, the numpad and navigation clusters removed. Basically a few hairs larger than the smallest you can make a physical keyboard without me calling it useless.

Conveniently my tablet fits in much the same spot. Since swapping the wired keyboard for the Bluetooth one, I find it much less hassle to simple push my keyboard aside and put my tablet in the same spot; whichever I am using at the time usually takes center stage and the displaced ends up on the side-zone or next to the charging cable.

I think it is quite possible that if I had a dandy stand in here like I do on my living room end table, I'd probably would have dropped my tablet in it and toggled my keyboard over to my tablet; rather than writing this on my desktop. Yes, I'm kind of lazy 🙄.

^ Two left mouse buttons in 10-15 years is too much 😜. I loved both my Logitech MX-series laser mice but wanted something with claims of "Many damned clicks" before it dies.