Well, my back hurts and I need a fresh shower, but my closet is a box of shit lighter and now back into an organized tech state. 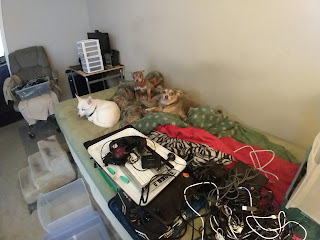 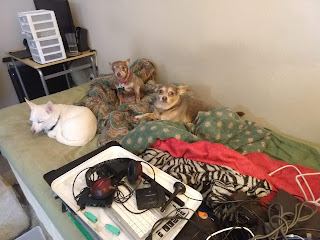 The dogs, Corky especially, were about half convinced that I had lost my mind.

Last time I cleaned tech, I had eliminated some of the oldest stuff. E.g. limiting myself to a single graphics card that's AGP, one SATA DVD burner, and a lone floppy drive/cable: just in case. But that did nothing for ~20 years of VGA, Ethernet, AC power, IDE, and other cables. Most of which survived.

For some of the harder to kill items like VGA and IDE, I'm keeping at least one decent pair for the odds that someday I'll actually need one, and that'll probably be in enough decades that they won't be so cheap without visiting a landfill.

Likewise it feels good to have things back to order. One drawer is everything audio, video, network, and power that isn't collected else where. Another bin collects the various USB things that aren't the above, and another for misc stuff like my spare keyboards. Boxes used to collect internal components, like old PCI-E graphics cards(, and yes, still one AGP card), my old Audigy 4, internal cables and fans and shit, etc. Some larger things like an old tape drive

It's kinda interesting how over the past thirty years, we went from having hardly anything but the Tandy 1000 set, to a closet full of computer shit. I feel bad for how unlikely some of it is—might need a VGA cable within the next twenty years, but I doubt MHL and SlimPort DP over MicroUSB-B are ever going to make the "Just in case" bin. Actually in another five to ten years, those should probably join the last composite video cables on their way out....lol.
Posted by Terry Poulin at 11/17/2019 02:05:00 PM