Not sure that my emergency action plan has changed much since I was a child, aside from the rise of LED bulbs and that my phone can speak an emergency alert for tornadoes. But I'd like to think warning times have improved over the last couple decades.

Officially hunkered down. All the things near shelter point. Etc. But based on the radar and the weather, I'm thinking if I was going to die by tornado tonight I'd already by dead. Just the same, I'd rather it be a shorter trip if I find myself grabbing dogs and taking cover.

And then there's the part I find more mixed.

Decided while I was at it: fresh underwear. Not unusual as part of my getting ready for bed. But not a horrible precaution for tornadoes either.

But then I pictured hanging from a tree branch by the elastic, narrowly saved from being gone with the wind. Because my sense of humour is rather twisted and easily amused. For some reason: this made my mind flash to a scene in the old visual novel: Family Project. Soon after the middle aged woman,  Masumi is introduced into the story: she tries to commit suicide by leaping off the nearest bridge. The main character ends up saving her by her panties, and putting the elastic to the ultimate test, in what's a spectacularly hilarious scene (if terribly embarrassing for the character). Personally, if I was in that predicament, I'd be keeping that pair for good luck, lol. 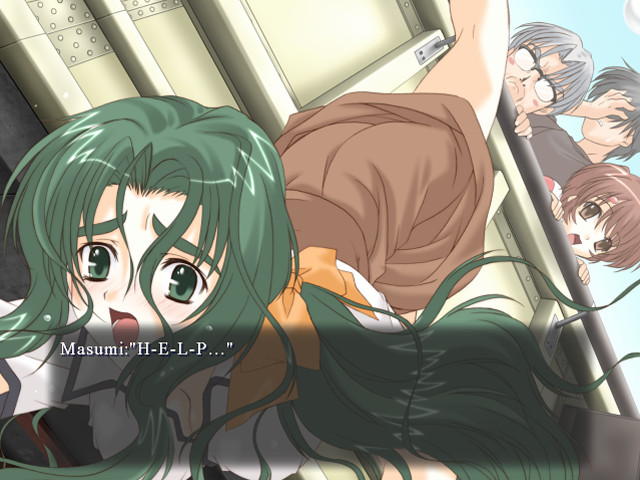