On one hand it was a little early for lunch. On the other hand, I've basically been physically active since I woke up at 0730'ish. So, I'm going with a notion from one of my favorite visual novels, that having expanded a lot of calories and having no good reason to wait: you naturally eat lunch, early.

Which also makes me realize that I haven't had any coffee yet. Therefore, it's time to make coffee while I update my journal ;). 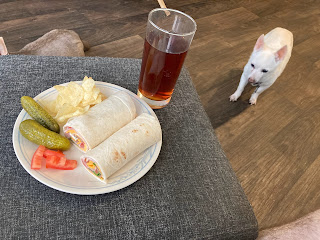 Because I'm weird, I like pickles on the side. Because I'll eat at least half the bag otherwise, I'm smart enough to put chips on the side too. And who needs a few bits of tomato leftover just because you were one piece of ham shy of another wrap.

Think I've found a pattern that works really well for me in terms of making a sandwich wrap. These are made by:

I've been following variations on this pattern for a while and like how this turns out. Putting the cheese on the outside seems to help bind it together, as the softer cheeses will melt relatively quickly. Putting the cold cuts between the cheese and the watery bits seems to keep it tidy and less likely to spew out.
For me, I find that bread often goes bad before I can work through a loaf unless I go on quite the sandwich kick. Wrapping up a tortilla on the other hand, is at least no less healthy than my taste in breads, and easily tossed in a refrigerator bin with the cold cuts and cheeses. 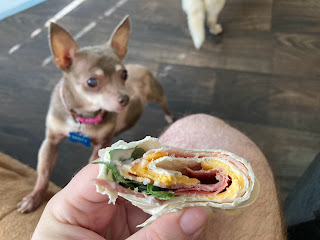 From a healthier prospect, I should probably have skipped one of these halves. Not sure if it's due to this morning's exercise or the more sating approach to filling a sandwich wrap, but I found this to be quite a lunch. In either case, Misty would have been happy to eat the other half!
Posted by Terry Poulin at 7/03/2022 11:15:00 AM

Email ThisBlogThis!Share to TwitterShare to FacebookShare to Pinterest
Labels: Food