Kind of a mess made from leftovers and culinary heritage, it worked damned deliciously. 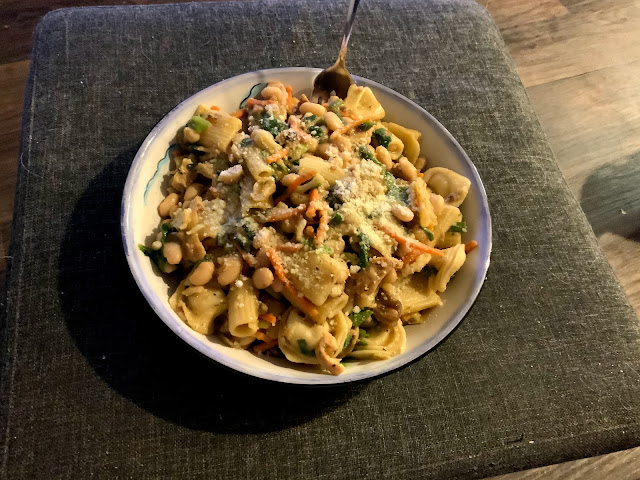 Leftover rigatoni, a few leftover cheese tortellini, scraps of meatloaf, last of the fresh mushrooms and some grilled chicken strips. Combined with shredded carrots, lettuce, green onions, and a can of great northern beans. Various seasonings, and a few spoonfuls of gravy leftover from the meatloaf.

My mother often made beans and elbow macaroni. What she dubbed Italian peasant food, and what I dubbed delicious. Once in a while she also made spinach and beans. Thinking of these, and being rather in the mood for the latter, I opted to make a mess inspired by those meals of my childhood. Both are excellent delivery vehicles for grated Parmesan cheese.

Oddly, the carrots and green onions were something that rarely found there way into such meals. But being the one in front of the sauce pan, I get to pick what goes in 😋.

Email ThisBlogThis!Share to TwitterShare to FacebookShare to Pinterest
Labels: F

Signs that this iPhone thing is going to workout:

Part of the value here also lay in the use cases. Typically my tablet screen on time can be measured in hours per day. More if I’m using it, less if I’m mesmerized by some video game or book or Netflix or whatever. By contrast my phone screen on time can probably be measured in tens of minutes per day, unless someone sends me a lot of text messages in the middle of the night.
Which is a pretty stark contrast to years past, where I used my phone pretty significantly. Over the past five years or so, Android’s evolution and my usage patterns basically killed my phone use in favor of tablet use the rest of the way. While the transition to iPadOS was rather rocky, given my heavy demands in tablet: the transition to iOS has mostly been trivial.
You could say that my life around Android largely caused me to bypass the long ass wait for decency in iOS features, after eons of going “Huh, how the frak have people lived without that all these years?” whenever a new iOS release happens. Likewise the tablet use killing phone use, basically means I don’t give a frak. Jelly Bean was still a thing when I used my phone heavy enough to care as much about my phone, as my tablet keeping pace with my computing needs. So by now, iOS easily handles my demands upon a phone and mostly fits my demands upon a tablet or desktop.
Sigh. Here’s to hoping someday Google returns to producing software that I can depend on instead of software prone to pissing me off more often than not.
Posted by Terry Poulin at 12/23/2020 10:50:00 PM No comments:

Searching for an image of Penny’s computerized book, I was delighted to come across: 16 REAL MODERN TECHNOLOGIES PREDICTED BY INSPECTOR GADGET.

While I might choose more modern analogs; like a tablet rather than a laptop. I'm still thrilled that someone actually wrote such an article. And to be fair nearly a decade ago, phones and tablets were still quite young when it was written.

Don't think I've really watched the series since the early 2000s or late 90s, about the last time I can recall the reruns being in the air back when I watched normal TV. But still bugs me that I couldn’t recall much of what Penny’s book looked like without looking it up, lol.

In the words of a literary character, “Mischief managed.” 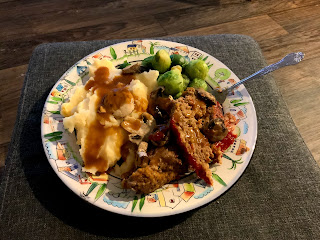 Managed to be smart and both warm up the oven AND the ground beef, and leave the other stuff set aside. With plenty of time to let the oven do its thing. The number one reason I’ve rarely made  meatloaf I’m recent years, is it takes a good while to cook if you do it right. On work days that usually means an hour later than empty bellies want to wait. 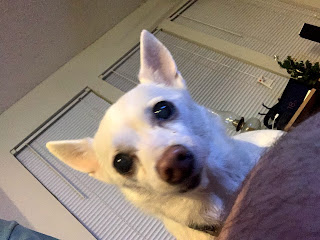 Willow and company of course hate that the pecking order is dinner, and then their nest treats.

“Why am I never that comfortable? I must be doing this wrong...” 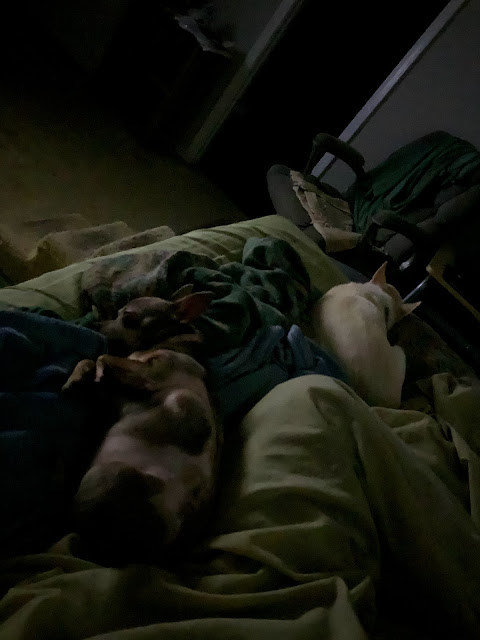 Overall Dragon Quest 11 has made me chuckle more than a few times in the course of its story. Especially involving Rab.

Most of the best chuckles have been somewhat out of place bits involving bunny girls. Well, depending on whether or not he already reminded you of Master Roshi by the first gag.

The bit with the naughty stick however is just so deliciously fitting and humorous! 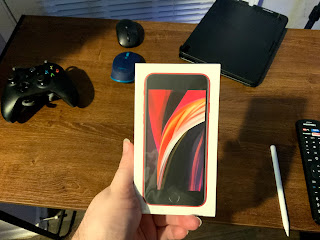 For the majority of my use case my SMS roll through my tablet. A process that Hangouts, as meh as a chat app is it has always been: handled well. In the years prior, I had relied on a Bluetooth connection between my Android phone and tablet to make the magic happen. In the post Hangouts world, I pretty much just relied on its integration.

Google Fi and Hangouts started the GTFO and use Messages push a week or two ago. Since Hangouts ends in January, I decided to give it a go and see how good the results would be. Well, an iPhone SE is how well that experiment went.

Using the web version on my tablet shifts from how Meh the current iteration of Hangouts is to “And why the frak am I using this?”. I figured, at least, it had to be worth while on my phone. Whether it’s the natural way it works, or an aspect of Google Fi: Messages sucks ass on my Moto X4. I dislike using the web version; I despise using the Android version. Even more so where the combination of web + phone often leads me to to using multiple profanities when the phone eventually catches up.

Originally, I had assumed that I would be using android messages when I upgraded from my old Galaxy S5 to the Moto X4. But most messages arriving through Hangouts rather than that, pretty much lead to me ignoring it. Not broke, don’t care. Well, at least for a few more years at that time.

My primary computer when I’m not doing real work is a tablet. Many of the Android tablets I’ve used ended up full blown keyboard/mouse/monitor driven workstations on top of being my general purpose tablet. Thus my phone doesn’t really see a lot of use.

Typically I use my phone when:

In effect this means my phone represents 10 - 15 % of my non-productivity minded computing, and aside from answering messages in the middle of the night: I’m usually found on my tablet or I’m occupied and not available. Since I’m usually using a tablet, my phone’s data use represents an average of up to a hundred megabytes of cellular data. Drastically down from the years where I averaged several gigabytes.
Apple’s iMessage doesn’t really interest me. But it does two things for me. It fixes the suck-ass experience of using my iPad Pro with Google’s new plan for my Messages, and it makes me not want to flip my phone out a window whenever I wait for messages to sync back up 🤣.
Thus Bean Sprout has been retired in favor of Benimaru. So named because the Project (RED) design reminds me of Rimiru’s commander in chief in TenSura.
Posted by Terry Poulin at 12/18/2020 04:38:00 PM No comments:

I'm pretty sure that will be the day the first Terminator rolls off SkyNet's assembly line.

That I sit here fucking with Google and Apple things, both those sentences give my sense of humour a perverse tickle to the funny bone.

Now this sounds like some good news, in a year that most people haven’t had much good news. Well, unless maybe you’re a family owned and operated toilet paper factory or the like. But mostly, yeah.

Here’s to humanity and our stubbornness to keep on loving’

Every now and then, I kind of wish I had a camera capturing what I see. This morning was one of those breakfasts.

I often make frozen sausages with breakfast on the weekends, so that I can share with the hounds. Microwave, slice up, and vola. Well this morning was some roll off the counter, like a my ooor meatball impression. Corky nabbed it and trotted off. Had to grab hold and with my nose on his head, convince him to let go of the frozen sausage. There were teeeth marks where he resisted this, lol. Should probably just be glad his tongue didn’t get stuck to it.

As an apology, tasty dog treats were issued before breakfast, and Corky got the first helping of sausage.

Willow knows exactly how to spend a Saturday, lol 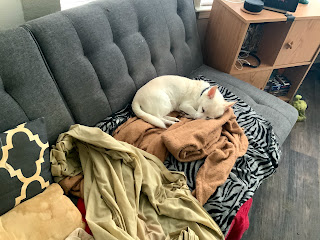 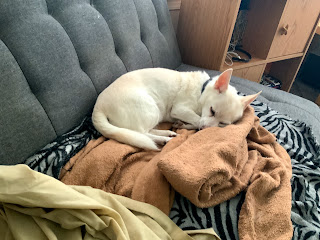 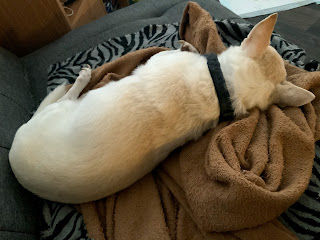 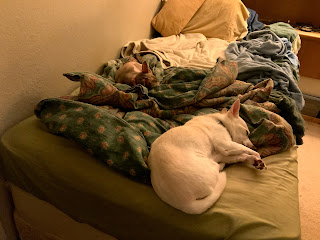 Endeavoring to get the Christmas tree done, I opted to reach for one of my favorite holiday films: A Christmas Story. Affectionately known in my family as “Ralphy.”

I’m not sure if my mother tended to think about her parents a lot when we were decorating for Christmas, or if she was too busy with us little hooligans, but I tend to think about my parents as I put up the tree. Pretty much my entire life: we’ve watched Ralphy. It’s long been a tradition of sorts for me to catch it at least once during the Christmas marathon, often in bits and pieces. It never really seems like Christmas time without that.

For me, it’s got a double meaning of sorts. See, the film is so exactly a reflection of the world that my momma grew up in that hearing about that itself was kind of like a Christmas tradition itself. It was kind of her way of sharing a piece of her childhood with her own children. To even fathom how many references to her childhood there is in the film, we’d probably have to enumerate just how much ‘stuff’ is shown in Ralphy, lol.

Must of heard all the stories a thousand times over growing up, but I never really got tired of hearing her share that with us.

While the steak ended up a little overdone for my tastes, the onions were pretty spot on 😄. 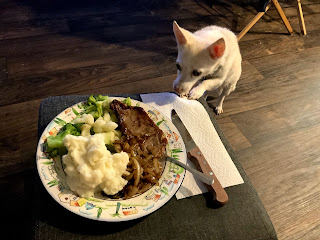 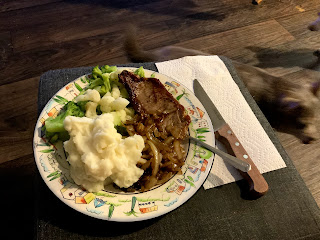 Could it be sad, if my first thought was “I hope it isn’t the one with the crusher?’