There's a concept that I tend to think of as "Haha, only so serious" for lacking a better way to describe it.

I tend to view seriousness and humor as a balanced dualism that goes hand in hand rather than as diametrically opposed sides of the coin. The best humor tends to filter through by taking ourselves seriously, but not oh so seriously that we forget to laugh in the moment.

Perhaps I feel this way because life tends to be more like The Joker's laugh after Batman wins and pawns him off on commissioner Gordan. Far more than our laughter in the real world tends to be as brazen as a chorus doing the can-can. Thus as someone who enjoys a good laugh, I tend to appreciate humor that stems from not taking oneself too seriously.

Finding myself searching Netflix for something simple to watch, I was pleasantly surprised by a little cheese flick called The Warrior’s Gate. It’s stoic sense of humor and comfortable territory makes it entertaining, if not spectacular. Many movies exist that fit that bill, but are sometimes hard to find. Often mixed into the same bin as films that try to be something more than a cheesy enjoyable romp.

And then there’s the ending. With the ice cream, I’d say the twist is exactly as it should be. But warrior Zhao teaching the knights in the end......oh man was that a priceless finish.

Input chosen for this case, is of course episode one of That Time I Got Reincarnated As A Slime aka Tensura. My normal preset in Handbrake that most notably for video does a x265 encode at quality 22, which is ample for 1080p anime.

Centauri normally takes about 35 - 40 minutes to complete encoding an episode in this context. Seeing Rimuru reporting average FPS in the 50s, I had a split take and double check that Handbrake didn't screw up my imported preset settings, and of course it didn't. Rimuru is just that powerful a demon lord.

Looking like the new estimated conversion time is about 10 minutes per episode rather than 35 minutes. I can almost see Shion's smiling face in my mind's eye....lol

When I originally designed Centauri: it was with the spec that it should last at least five years before it would be cost effective to replace it. By that, I mean it has to take so long to do shit that it's worth money not to have to wait on it. Dear Centauri made it to eight years with most of its bottle necks only showing up in the last couple. I'd say that's pretty good. 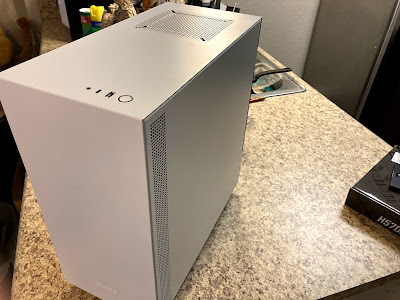 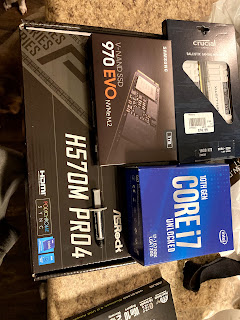 Since my 5 year design ended up pulling 8 years of duty, I opted for the biggest influencer of that spec. Centauri rocked a Core i5-3570K based on the assumption that it would retire by the time it became the problem, and lo and behold it really was the main bottle neck. As such, Rimuru rocks a Core i7-10700K because I've specified parts based on a 10 year service life.

One of the primary goals aside from that was the modernization of technology. Two pieces of tech have been on my mind as possible final retro fits for a few years now.

I've reached a point where USB-A only exists for old technology and existing peripherals that have nigh indefinite life span relative to their host computer. Things like my web cam and mouse.

Rimuru sports a snazzy front panel USB-C port perfect for the fact that most of what I want to connect now functions through USB-C. Likewise the motherboard rather resolves one of my gripes with its predecessor. My old Z77 chipset was a superb motherboard but it sadly was a bridge chipset, literally. Coming from the era in which USB 3.0 became standard only two rear ports and the two front ports were 3.0 with the otherwise ample ports in back being 2.0s. On the H570M the only 2.0 ports are header; all rear ports are USB-A, and two of them are rated for 10 Gbit/s. A perfect solution to having to be careful which USB goes where in the back. 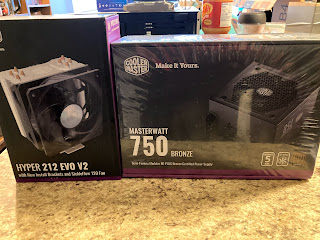 Second temptation was the insane speed of NVMe drives. It's been on my mind the last few years that there is no point in buying SATA drives anymore, except as external SSDs and use cases where big, cheap HDDs are the win. While I could retrofit an M.2 slot to my old Z77 it wouldn't be capable of booting from the drive.

While I was at it: I decided on a fairly future proof power supply. My GTX 780 was the root cause of my last power supply upgrade, but is so powerful that it's not typically the bottleneck Centauri experienced. 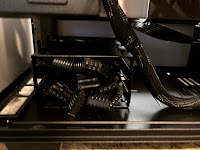 Opting to take advantage of the situation: I picked up an affordable power supply off a list of PSUs capable of driving an RTX 3080. In terms of PCI-E power connectors I could run two 780s. It's also a semi modular—meaning everything but the ATX power cables "Plug" into the power supply rather than having to be tied off and routed. Since Rimuru is operating M.2 NVMe only, and has 2.5" SSD mounts on the side panel: there is nothing in the drive cages below. As such I tossed the power supply's remaining cables in there, so I don't scratch my head in the years to come wondering which box in the closet they landed in.

Somehow it does seem ironic that the first live fire test of Rimuru's capabilities was playing a DOOM (1993) 😁.

Raw performance testing in more interesting vectors has also been promising. Tested one of my projects that takes Stark about 15 minutes to compile from scratch, and Centauri pulled it off in about 7½ minutes to compile. Rimuru did it in 3 minutes. Bare in mind, Stark is the development system in the family and a laptop of similar vintage to Centauri.

Like her predecessor, Rimuru gets a nice "Assembling" album that tracks and marks things as part of the build. Centauri was the first PC that I built in the era of phones and cameras everywhere, and that really worked out. In a similar lesson from Stark, she also gets her own entry in y note system to serve as a log book of major changes and configuration. I've actually got pretty good at coping with that puzzle over the years.

Wait, no wonder my beard is turning grey...lol

Avocado, cheese, grilled chicken, and ranch on French; also the glare of a hungry Misty. 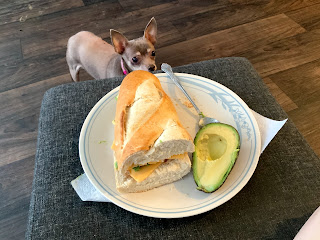 My real problem with avocados is the same as my problem with hard boiled eggs: a tendency to find myself standing over the kitchen sink with a salt shaker, eating them as a snack.

On the positive side avocado farts are less deadly than egg farts...

Email ThisBlogThis!Share to TwitterShare to FacebookShare to Pinterest
Labels: Food

Xbox Gaming Lead Still Doesn’t Understand The Nintendo 64 Controller
That kind of maker two of us. I always found the N64 controller confusing and old feeling compared to the previous generation of consoles. By contrast the Play Station controller was pretty natural, and easily picked up by a kid accustomed to the Super Nintendo and Sega Genesis. Adding the analog sticks in the Dual Shock configuration didn’t change that.
Actually one of my minor grumbles when I bought the original Xbox One was the controller. The Xbox One controller is fairly familiar but swaps the D-Pad and left thumb stick from what you’d remember on the old Dual Shocks.
The times I’ve used an N64 controller, well, let’s just say I tried not to have to move my grip 😜.
Posted by Terry Poulin at 3/06/2021 06:41:00 PM No comments:

Email ThisBlogThis!Share to TwitterShare to FacebookShare to Pinterest
Labels: games, Nintendo
Why You Should Stop Using Gmail On Your iPhone
To me this is more an indication of whether or not you should use Gmail as a service rather than the application. Google has always been fairly open in that you should have no allusion to privacy between their services.
Applications like Apple Mail and Windows Mail have the virtue that we tend to think of them as Mail clients, from companies who also offer email services. Gmail we tend to think as both, and using any given client doesn’t change where your messages are stored and exposed; in fact it might even broaden them depending on the client and services used.
Posted by Terry Poulin at 3/06/2021 06:22:00 PM No comments:

Email ThisBlogThis!Share to TwitterShare to FacebookShare to Pinterest
Labels: Google

My day in pictures and yadda, yadda 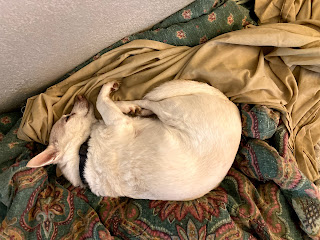 Getting up this morning: Willow was so comfortable that I had to take a picture. Got cleaned up, took the Bonnie birds for a walk, and breakfast. Calculated that my routine of breakfast sausage to share with the dogs and toast or the like, is about 560 calories. Actually the most calories is the peanut butter on the toast, lol.

Made coffee, took Willow for a walk, and then got to finish my coffee. Because by then she’s armament for her second walk. Coffee and Xbox make for a cozy morning off. 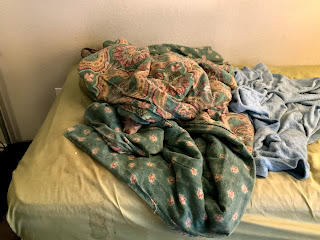 Misty has two super powers. One is hunting for food. The other is being comfortable.

A mixture of Saints Row 4, Metal Slug 3, laundry, lunch, and Twin Mirror reminds me that mixing chores and relaxation is a good plan. Forgot to hang the wash, but at least I did manage to clean my refrigerator 😂. 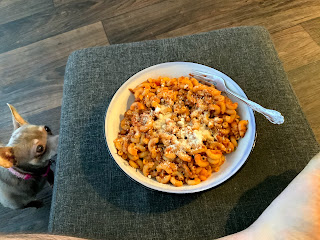 Pretty often I end up making pasta, but rarely beefaroni. Growing up it was a relatively common cheese delivery vehicle amongst my mother’s cooking. Actually, I don’t have any recollection of eating the canned stuff. So much as stuffing my face until a nap was warranted, lol.

Kind of worked out as a perfect storm of convenience. Had some ground Italian sausage in need of being used up, been meaning to use up the elbows for a long while, and boiling the macaroni is good for the humidity. Plus yields more food for next week, and when aren’t I okay with such food for dinner? 🤪