USB-C all the things

The way it used to be:

Rimuru has mainly USB-3.0 ports, and her first refit was included a 10 Gbps USB-C expansion card to free up my front panel. So in the back I have two cables run up to my desk to handle older devices.
While leaving my front panel free with its USB-C, USB-A, and audio ports. So most of the time I just end up plugging into the front panel C port. If I want something with SD, rather than fishing my adapter out of my backpack: I just use a USB-C hub. Another perk of sorts is having two of those, one for my backpack and one for home. They were originally intended for my Galaxy Tab S3 and iPad Pro, since my previous PC was built at the dawn of the USB-A 3.0 era. But I had planned ahead based on the assumption that someday my PCs would get with the 21st century, lol.
Can you tell that I don't really miss USB-A very much? It's mostly retained here for equipment that lasts nigh for ever, like my web cam; or for flash drives that I usually use for booting older computers.
Actually, I don't really buy USB-A flash drives anymore either. The newer ones that I have all came from the local Microcenter mailing out coupons, or to phrase it kindly: "Please folks, we wanna get rid of these things. Take a coupon for a free one, and please give a few coupons to your friends!"
Because of performance: I'll usually reach for my hard disk and solid state portable drives that have a USB Micro-B 3.0 interfaces. Rather than using A to Micro-B cables, I've started to use C -> Micro B cable for that ^_^.
Posted by Terry Poulin at 7/31/2021 05:14:00 PM No comments:

Ever since getting the Raspberry Pi Pico, there have been two experimental projects in the back of my mind.

The first is of course: how to run DooM on the Pico. Based on what I've seen, I suspect the main point of suffering would be the limited ram compared to a i486 machine. Most of the console ports back in the day managed to show horn things into fairly modest systems, and I bet the two cores would work great for doing video/controller input on one core while the actual game runs on the other. What I haven't been able to decide on is what path to take to explore that project. In my mind: I kind of see it as a more "Game Boy" like hand held with a screen and controls than anything else. I certainly don't want to do ASCII doom over COM port :P. It would also be preferable to have separate storage that can address the storage capacity of WADs without having to cookie cutter a level into available flash, making the hand held style even more appropriate.

Second is building what in essence would be a personal computer. In essence a lot like '70s kit computers such as the Altair, but imagined through the eyes of a geek that grew up in front of an MS-DOS machine. It's stuck in my head a while that the Pico is far more powerful than the early CP/M and DOS based systems, and that it isn't that complicated to connect the pico to external devices. From the prospective of fun, I think it would be neat to design a simple system around the Pico and built out something like a PC around it. On the downside, while creating a disk operating system in the vain of CP/M isn't that big a stretch: I can't really say that I fancy bootstrapping a toolchain to write programs for a custom operating system. But it's an idea that keeps floating around whenever I look at how powerful the Pico is.

As a side note, I kind of wonder how hard it would be to replace the CRT in an old Macintosh SE style case with a similar sized LCD panel. While gutting the rest of the insides, and just using it as the mechanical environment to mount stuff. Really, I'm not sure if that's brilliant or sacrilegious of such historic machines. Although to be fair, people have done some strange things with the cases of old busted Macs over the years....hehe.

Email ThisBlogThis!Share to TwitterShare to FacebookShare to Pinterest
Labels: computers, games, Programming, Projects
Now this is very interesting. Both because SCSI2SD is a bit expensive, and because the newer V6 boards would need an adapter to hook up to an old Mac. But on the flipside while the current SCSI2SD seems pretty swell for connecting to other SCSI devices via adapters; a Raspberry Pi itself is a pretty general reusable platform.
As far as I’ve been able to figure out, old Macs have ridiculously slow SCSI buses by modern standards of any mass storage device, and I think they didn’t even support DMA until the late ‘90s. But to be fair hard drives were typically in the 10s of megabytes in the late 80s - early 90s, and a few hundred megs at the most.
Posted by Terry Poulin at 7/31/2021 11:24:00 AM No comments:

Minecraft’s 'Worst' Server Was Exploited So Hard, Griefers Could See The Future

While I think the author’s grain of salt, or “Conflicting” feelings at the end are an apt view. I will admit, this is somewhere between utterly insane and utterly brilliant. I can’t really say that I approve of the activities, but given the anachronistic nature of the server, it seems some folks sure as frak made the most of it.

It’s rare for something to be both utterly insane and utterly brilliant at the same time.


Been hearing bits and pieces for a while now, and anxiously wondering when we'd see a release. Sounds like the new Dune fil is due in October, and one can hope ^_^.

My introduction to Dune was the 1984 film. One late night, my mother invited me to watch it with her, but warned that you'll probably have to watch it twice to understand it. And of course, I did, lol. Some years later, she would also lend me her copy of the book, and House Atreides. I think Dune still holds my personal record for most pages read in a sitting, since I basically sat on my ass and inhaled about the first 100 pages--after reading the four appendices! I remember seeing the novel had appendices with information about its world, and just knowing that it would be my kind of book.

Oddly, ironically, or fated, the other night I started reading Dune again. It's been maybe eight or ten years since I last read it.

Since reading the novel as a kid, I've come to have a cautious view of anyone attempting to make a movie out of the story. It's just to big and multifaceted. The cluster-hells aside, the '84 film basically cut out 30 - 60 % of the novel, literally an entire cast of characters worth. But it still managed to tell the important pieces of the story, and is far from a short film. Much like the Lord of the Rings, I try to respect the fact that no one can watch a 12-hour long movie without taking multiple bathroom breaks unless you're wearing a still suit or diapers.

IHMO, unless you're prepared to make a film trilogy out of it I think Dune lends itself more to a miniseries than a theatrical film. So at best, I can hope to enjoy Villeneuve and cie's efforts. Sounds like he has the good sense to make it more than one movie, hopefully that pans out. The novel itself, as I recall: was not only followed by four appendices, but also divided the story into three "Books". Which is well reflective of how long a story Dune is, regardless of the publishing history that lead to it being so.

When I was younger, I pretty much figured that if I ever had a nice cozy garage with a work bench. Odds are, I'd end up tinkering on electronics; probably with hair like Doc Brown by the time anything useful was learned.

As an adult who ended up a computer nerd, I'm now fairly certain I'd end up with a garage full of old computers. Probably a good thing that I don't have that much closet space nor a garage 😂

I remember hearing about Bill & Ted 3 some years back, and thinking skeptically: "Why the heck would they want to make another one after so many years?". And, kind of happy I was wrong, lol. Face the Music is an awesome movie!

The notion that after twenty five years, Bill & Ted are still trying to write the song that will unite the world is pretty spot-on for a concept. Very happy to see how that played out with Bill & Ted & the princesses. Since I grew up watching the first two films, the continuity of spirit is kind of awesome. Excellent Adventure is almost as old as I am, and I probably watched Bogus Journey most times I came across it.

Totally loved the time hopping and universe imploding. But especially how the most excellent daughters fit into it all. As they face the music, it was quite a spectacular end to a journey.

Email ThisBlogThis!Share to TwitterShare to FacebookShare to Pinterest
Labels: movies

Random fun, or perhaps just signs that I'm getting both old and weird.

In finding myself in the mood for some Advent, the only version I've ever encountered on modern platforms is the version from OpenBSD's games install set. Which shows some of the joys of FORTRAN to C conversion. The code looks like the most significant changes it's seen in years are just related to security measures ala OpenBSD. Since I don't have a machine running that OS handy, it's not a quick login and run.

In debating how much poking and prodding getting code to compile on one of my Linux or Windows environments, I came across a fun little fact. ESR has a repo on GitLab dubbed Open Adventure that both compiles on Linux, and has tried to make the code more legible to modern sanities.

While trying to figure out the game from its source may be a surprisingly good idea, l find it rather covenant that it compiles and runs. Because while poking around code is what lead me to the mood to play advent, that's a bit of a different activity from porting advent, lol.

While my dogs are mostly unphased by the local fireworks, pardoning when some folks get a little crazy, I'm often reminded of this comic on The Oatmeal: 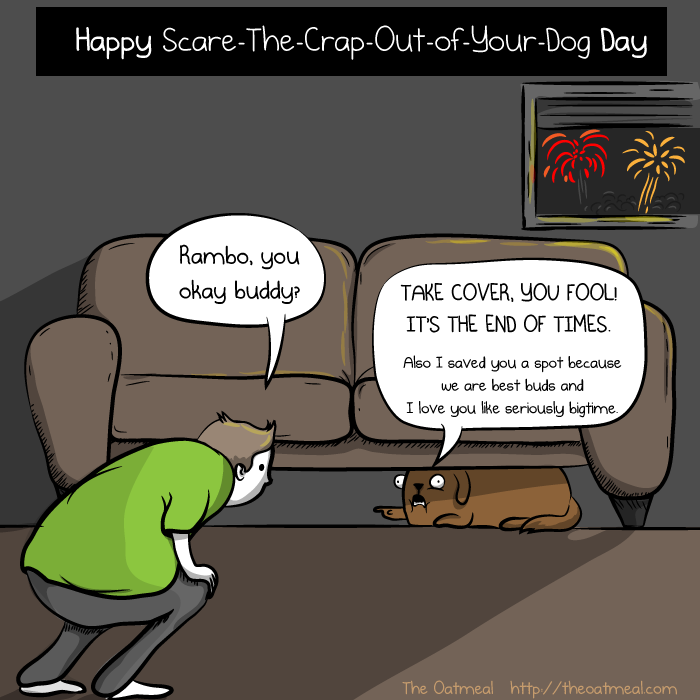 For the most part, it still seems appropriate.